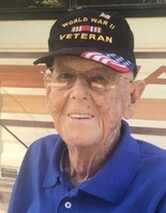 Ronald G. Bailey - Obituary
​Snow Camp - World War II Veteran Ronald Bailey, 94, of Snow Camp, NC, passed away surrounded by his 5 children: Patsy Bailey Allard, Chapel Hill, Kendall "Bucky" Bailey (Sheryl Smith Bailey) San Juan Capistrano, CA, Jody Bailey (Carol Westlake) Nashville and Snow Camp, Barbara "Barbi" Bailey-Smith (TJ Smith) Durham, and Ryan "Rebel" Bailey (Donna Jones Bailey) of Nashville. In addition, Ron had 3 grandchildren and 3 great-grandchildren. He was married for 29 years to Pat Bailey, local historian and photojournalist, now deceased.
A member of Bethel United Methodist Church, Ron was drafted into the Army the day after graduating from Eli Whitney High School, declaring "After farm life, Boot Camp was easy! "
Ron's career with Western Electric/AT&T included being on the team that built classified ocean surveillance hydrophones to detect enemy submarines, which led to the surprising discovery that whales communicate. He also spent 4 years working for national defense at the Kwajalein Missile Range in the Pacific. While there, he developed a talent for ocean snorkeling and polished his photography skills. Stateside, Ron was a long time Boy Scout Leader for Saxapahaw's Scout Troop 65.
After retirement, Ron traveled the US in an RV for 22 years, settling in Florida. Always the adventurer, at age 89 Ron paraglided 300 feet off Torrey Pines Cliffs in San Diego. He returned to his NC home to spend his last year with his children. Ron's final mission was dedicated to spreading joy. His motto: "Yesterday's gone, Tomorrow's not promised, Let's enjoy today!"
A private service is planned for immediate family.

For those interested in honoring his memory, donations may be made to:
Troop 65
2176 Softwinds Drive
Graham, NC 27253
(Please note that your donation is in honor of Mr. Bailey so that we may notify the family.)

Notes to the family may be mailed to:
Bailey Family
12 Eastwind Place
Chapel Hill NC 27517.

A great Troop with a great location for Scouting!

Troop 65 is located in Saxapahaw, NC. We are part of the Old North State Council, and Chartered to Saxapahaw United Methodist Church. Chartered in 1941, Troop 65 has produced many Eagle Scouts over the years, and many productive members of society. We are proud of them all. Since 1965, we have met at the Ben Bulla Scout Cabin, which is located on the scenic bank of the Haw River at Saxapahaw Lake.

Troop meetings are Monday nights from 7pm to 8:30pm.